The location we were fishing was located halfway to Carlos Paz, through a national park, on a local rancher’s private property. The area itself was gorgeous. Large rock structures jutted from the ground reaching high into the air. 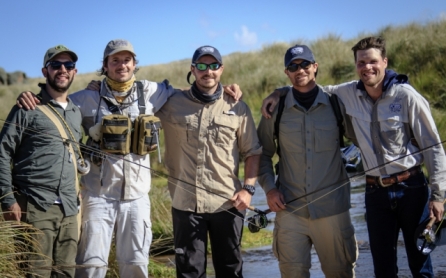 The terrain was composed of hills covered in sparsely grown shrubs and high grass. The river itself was beautiful, crystal clear with plenty of natural rock formations providing cover for countless Brooke trout. The sun was out and a nice breeze continually swept through the area. Occasionally, a lazy cloud drifted across the sky providing fifteen to twenty minutes of cover. If you saw the fish most likely they saw you as well, making it an intriguing game of predator and prey.

I accompanied Jason, Sam, Juan, Augustin, and Martin today. Our guides, Augustine and Martin, were very excited as we started rigging up the gear. They had fished the day before making sure to scope out the area before our arrival. 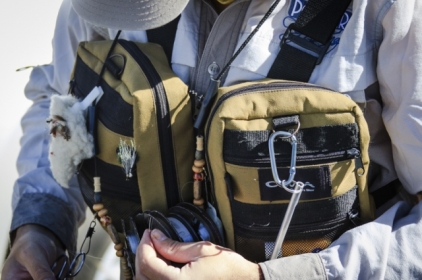 Clearly, they were pleased with the amount of fish and their aggression. Today we were using two four weight fly rods and a three weight rod. Our flies were nymph and moth patterns, exclusively dry flies. We finished setting up and began our walk to the river which was only a couple hundred meters away. As soon as we arrived at the water’s edge, Martin pointed out a small pool behind a large rock with close to fifteenBrooke trout in it. Martin beckoned for me to make the first cast. I complied and was delighted to see a Brooky leap from the water, devouring the fly in one graceful jump. Oh, this was going to be a fantastic day! Setting the hook a bit too hard, the trout flew onto the bank. I picked it up gently and washed it in the stream, slowly releasing it back into the current. It swam quickly back to its starting location where it joined its fellow Brookies. 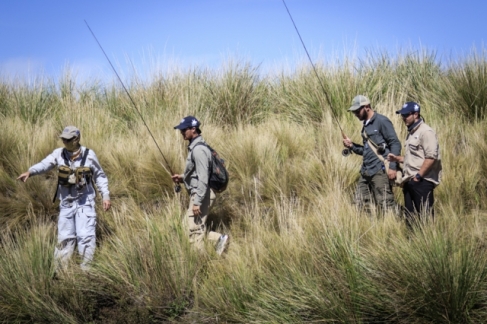 I looked to my companions faces and saw excitement strewn about their features. They were anxious and ready to start fishing. The river contained an innumerable amount of spots where hungry fish waited. They would not be disappointed this day. Sam and Jason began fishing. Each were inexperienced with a fly rod, yet their guides were solid fisherman and immediately began giving helpful hints. They were quick learners and adjusted their techniques accordingly. Soon after they mastered the basics of the fly rod, they began catching fish. One, six, ten, fifteen. The fish kept striking and Jason and Sam kept bringing them ashore. The average fish we caught was around half a pound, its length anywhere from six to twelve inches. Before we knew it, lunch time was upon us. We headed back to the vehicles.

Martin and Augustine set up the table for lunch and we all sat comfortably, enjoying the scenery while snacking on a picada. The picada was composed of pickled vegetables, salami, duck pate, cheese, and sliced bread. A delicious appetizer to enjoy while our eyes wandered over the terrain and we shared stories, laughing and grinning in turn. The main course was grilled chicken sandwiches. They were filled with avocado, bell peppers, succulent diced chicken breast, and onions. A light splash of lime juice to add a wonderfully tangy flavor. Martin’s wife is quite the cook! Lastly, for dessert, we had arroz con leche. It was a creamy consistency of rice and milk. A light cinnamon flavor gave it a refreshing taste, cleansing our pallets. As always we have wine, beer, soda, tea, coffee, or water to accompany your meal. All said and done, it was delicious and filling. Finished with lunch, we headed back to the river. 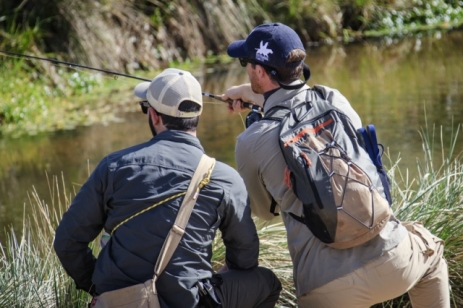 The rest of the day played out as you might expect. We caught Brooky after Brooky. Their aggression and quantity never faltered throughout the day. The last thirty minutes of our trip, I had wandered ahead a couple hundred meters in front of our group. I casted behind a large rock and watched my fly float nonchalantly for a moment. Then magic occurred. A large brooke struck the fly with a ferocity unmatched by any fish I had caught earlier that day. The fight was exquisite, bringing about a goofy grin to mark my countenance. I slowly tired the fish and brought him to the bank. It was by farone of the biggest fish in the river. It weighed around four pounds and was twenty-two inches in length. I looked around shouting for my companions. They were nowhere to be seen. My heart sank. Every fisherman knows proof is in the pudding. If I didn’t have someone to see me catch this fish, there was no way anyone would believe me when I recounted the story. So, I unhooked the fly and started running up the side of the river. Every ten seconds dipping the fish in the water, allowing water to run through its gills, making sure it could breathe easily. I repeated the procedure for a couple hundred meters until I finally saw my companions. I yelled excitedly beckoning them to come look at the monster I had caught. They quickly hurried over and took pictures. I kept the fish in the water, gently moving water over its gills, then releasing it with a sigh of pleasure. The Brooke moved swiftly into the current and then out of sight. A great way to wrap up the day. Later, before we left, Martin told me that there were maybe fifteen fish in the entirety of that river so large. It’s good to be lucky! 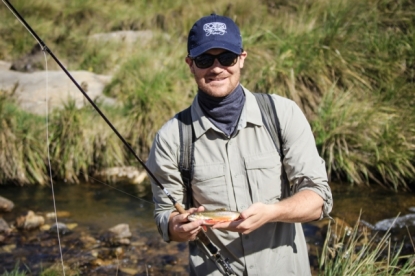 Finished fishing, we headed back to the vehicles. We were all feeling quite tired and looking forward to a relaxing evening. We were lucky to have such fantastic guideswho provided such a wonderful fishing experience! As always, Pointer Fly Fishingdelivered in full.

Don’t cry for me Argentina!